News from Kathryn Bjornstad-Kelly (yes, you read that right)

It's me again.  I'm still alive.  Slightly different name, different situation, plenty has happened since my last entry.  It's been so long since I posted that I almost feel embarrassed to be here again.

Things were really hectic after I made my last post till...well, about right now.  Taking 16 credit hours was a BIG mistake...school was horrible.  I came home and cried every day.  I barely had time to get anything done.  I felt like a failure.  The trip to D.C. was awesome but busy and left me with unfinished work-work and schoolwork.  I never even got to write a blog entry about it.  Corina did, and you should check hers out.  I intend to create a post about the D.C. trip eventually.  It's just not what I want to focus on right now.

I ran out of steam long before the semester was over.  Most people have a hell week where they are super-busy trying to get schoolwork done.  Not me.  I had two whole hell months.  The last two weeks were the worst.  I had to write four papers 1-page papers for one class, two 3-page papers for another, one 30-page thesis in another, one 10-page paper for another, and take a midterm exam.  I was also supposed to be planning my wedding during this and I didn't have time for it at all, which led to even more stress.  I barely got everything done in time.  I finished my senior thesis an hour before it was due and I was so stressed and sleep-deprived that I could barely think straight.  I wrote it on the history of the online neurodiversity movement and it was supposed to be around 30 pages but it had ballooned to more like 65 (not including the six-page bibliography).  I couldn't move out of bed for two days afterwards and without the adrenaline feuling me like it had for two months, every single muscle in my body ached.  I was really, really sick.

I'm done with school now.  My final grades were great, especially given how poorly I expected to do.  I forgot to sign up for graduation earlier this semester so I have to wait till May, but I'm done with classes.  I'm not even going to the graduation ceremony.  I don't care about it that much.  I'm just relieved that school is over and I don't have to feel the horrible panic of having a million papers due at once ever again.

That was in December.  I thought now that I'd caught up on things I'd write another blog entry...except that when I wasn't working I was playing video games or messing around on the Internet.  Then I started planning my wedding again.  I'd left a lot of things go, including the invites, during my two hell-months.  I sent them out a month and a half before the wedding, and then it was a mad rush to get everything done in time.  Two weeks before the wedding I was regretting my decision to have a large wedding and a couple days before the wedding everything was going wrong.  Due to circumstances too complicated to go into, our minister and one of my bridesmaids had to back out at the last minute.  (No hating on them in the comments, it wasn't anyone's fault, just unfortunate.  I'm still friends with both of them.)   We got one of our friends to step in for the minister and one of my cousins was able to fit in the absent bridesmaid's dress.  Problem solved.

I got married at the Univerrsity of Missouri-St. Louis's chapel at the Pierre Laclede Honors College on February 25, 2012 to Sean Kelly.  I was in a hurry the day of the wedding.  I barely had time to put on my dress and makeup before I was being handed my bouquet and I rushed to the chapel.  I was still calming down as I walked down the aisle to "The Princess Leia Theme" from Star Wars. 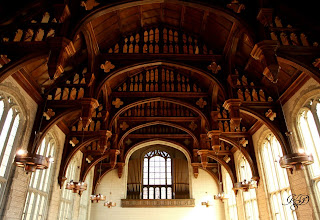 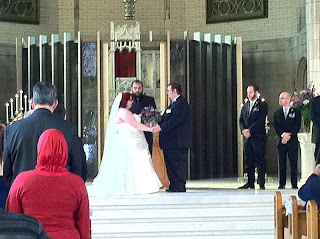 I never used to dream about my wedding.  Getting married was not a life goal for me because it seemed foolish to focus on wanting a wedding instead of marrying someone if you felt it was right.  If I had to do it over again I would plan it sooner and on my own and with less stress, but I'm glad it happened.  Everything pulled together in the end, and it was a beautiful wedding.  (The watermarked photos were taken by KSD Photography, by the way, and more can be seen on their Facebook page.  They'll have the rest of their pictures to me soon.) 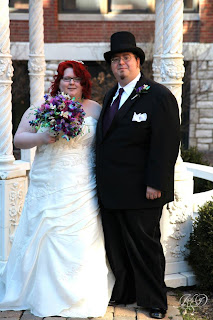 Being married doesn't feel that much different than being single did.  I'm still living in the same apartment with my husband, our roommate, and two cats.  My name is now Kathryn Marie Bjornstad-Kelly, and now I wear both pieces of my wedding ring set--it was a band and engagement ring, and I'll have a better picture soon.  Here's a picture of me in my engagement ring with Sean in his wedding band for now.  Mine is a light blue sapphire in white gold and his is titanium. 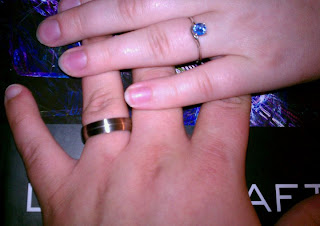 Right now I'm relieved everything is over.  I'm slowly writing thank-you notes and I'm eager to get back to work now.  Things are looking bright.  We paid for our entire wedding in cash and don't have a cent of debt, we got to stay a night in the awesome Moonrise Hotel on the Delmar Loop, I'm getting a new phone and Sean is turning 30 soon, we have lots of new kitchen equipment, we're planning a honeymoon soon...it's been a long time since things have looked this good.

It looks like I'll have a lot more time to blog now.  I hope all my readers are doing well.  You can expect to see a post on the ASAN Anniversary Fundraiser sometime this month.
Posted by Kathryn Bjornstad-Kelly at 1:09 AM 9 comments: